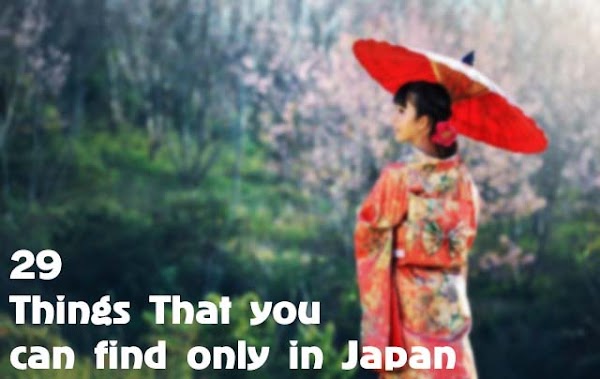 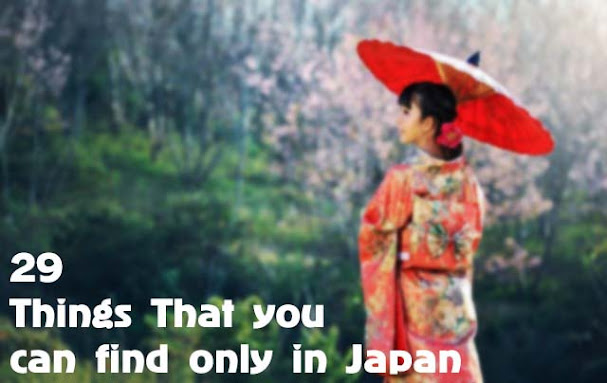 Japan is known as the Land of the Rising Sun, the land of cherry blossom,the island kingdom, or the country of the blue traffic light. There are so many things that make it a whole another world.

I am Sidharth today I will share 29 Things That you can find only in Japan. so let us explore together

Square watermelons were invented to fit in small places like the fridge and people can cut it easily. These fruits are specially grown in a square container to give them a square shape. These fruits are so expensive which is two to three-time than normal watermelons so usually people use them to decorate and attract more guests to their shop or hotel.

There is a spa named Yunessun Spa Resort in Hakone offer its customer an amazing experience of pork soup and ramen noodles. Pork is rich in collagen, so Japanese people believe that this type of bath is really good for their skin.

Please tell me which one would you try?

In japan shokuhin sampuru (食品サンプル), in the early Showa period, late 1920s candle designer and artisans designed food model to show the customers which were not normal at that time in Japan. Nowadays to make fake food that looks like the real one these foods are made by experts. These foods are shown in the restaurant to attract hungry customers. Usually, these fake foods are more expensive than real food.

in 1925 these some chemical weapons scientists brought several rabbits to Okunoshima Island to do tests. Later the animals were freed and started to multiply. Now the island is full of them, it attracts thousands of tourists every day. The rabbits are more friendly to humans and they even take selfies with them. Hunting them on that island is prohibited. you cant bring a cat or dog to that island.

Taking a photo in a booth is an old tradition, but Japan tries its best to make it as exciting as possible. In Japan the photo booths are called, called purikura,  where you can edit photos, you can add tons of different backgrounds, funny stickers, or text. Also, you can send those pictures to your Mobile.

In rush hour the subway and train stations are overcrowded. So in those times the station staffs and some part-time workers push the people inside to fit in the train.

Before going inside a building, you can “park and lock” your umbrella just like you do

with your bike. Now you can be sure no one will take it, and your umbrella won't make any wet spot on the floor. you can find the umbrella rack in most of the Govt offices, hotels, public places.

Japan has more than 5 million Vending machines! In Japan, it is normal to work late hours. So for the late hour workers vending machines is like a blessing. They can get ready-made food from them. You not only get snacks and drinks from the vending machine but also you can buy basically anything from liv fish to your underwear from those vending machines. is not that interesting?

There was a Godzilla who gets the citizenship of Japan in 2015, in Tokyo's Shinjuku ward. . The authorities provide him a certificate stating his own residency, and also offer him a job – letter the Godzilla became the tourism ambassador. That's not the end after that they even made a Godzilla head 171-feet above ground at Toho, the movie studio that made the original movie back in 1954.

Punctuality is a really big thing there, and train stations do everything possible to avoid a delay. Suppose a train is ten minutes late, the railway companies make sure that they issue a delay certificate for all the railway workers and passengers who missed an important work because of this.  If the train is late longer than one hour, they give an official apology in newspapers.

It works like its own name. There is a special microphone with a cone that covers your mouth. It covers up most of the sounds to be heard when you sing a song. This cone blocks up to 70 % of the sounds to go outside. It is really a good device for the people who don't want to disturb their neighborhood and for people who are shy to sing in public. Japan has many interesting gadgets .

While in many other countries slurping is considered rude, in Japan it’s a way to show your appreciation of the dish. If you don’t slurp when you eat noodles, then the chef will think that you don’t enjoy the food, or that it’s cold.

Usually when you eat a burger there some ketchup or mustard sauce around your mouth and it is not good to see and sometimes it makes us uncomfortable. So the Japanese fast food restaurant owners come up with a very interesting solution to this.  They serve the burger with a special napkin which covers the face of the guest who feels shy about looking irregular while eating.

They’re located right over the toilet tanks. The idea is simple: first you wash your hands over the sink, then it goes straight to the tank, and finally, you flush the toilet when you’ve done your business. So, you save water by using it twice.

It is not that the Japanese add some strange ingredients or recipe in the mayo sauce. But they don’t eat it with salads, meat, and sandwiches; in Japan, people usually use it as a topping for ice-cream or on pancakes.

In Japanese culture, dozing off at the workplace – or inemuri – is considered a sign of being a hard-working person who’s very committed to their job. That’s why inemuri is so common, and no one thinks it’s a bad thing. Some people even fake it!

You can find it in the basement of More’s Department Store, which is located in the city of Kawasaki. The escalator has only 5 steps and is only 33 inches tall.

The village of Nagoro used to have a population of 300 people, but less than 40 residents live there now. A local artist, Tsukimi Ayano, made over 300 life-size dolls, most of which look like former residents; and they’re located in various states of action. For example, there’s a whole classroom of them in the village school that was closed a while ago.

It’s common for Japanese culture to avoid the number 4 because it’s considered to be very unlucky. That’s why some buildings don’t have the 4th floor, stores don’t sell a set of cutlery for 4, and the number of guests to some event can’t be 4.

They use a blue color instead of green for traffic lights. The reason for that hides in their language: historically, there was only one word for both colors. When traffic lights first appeared in the country, they were as green as anywhere else. But that green color was still called blue. To make things right, the government decided to use the bluest shade of green possible.

Japanese kids learn how to clean in many schools because it’s a part of their education. They mop their classrooms and hallways, do dusting, and even clean the bathrooms. Teachers believe it’s a great way to raise responsible citizens.

Take the Tsudoi tourist train to get the most comfortable sightseeing experience. This train has footbaths built of aromatic cypress wood and filled with warm spring water that can soothe the pain in your joints. So you can soak your feet and enjoy beautiful views at the same time while traveling from Nagoya to Yunoyama Onsen.

Toilets in Japan are very high-tech. To use one, a person should know what all those buttons are for. There’s a variety of functions, including heating the seat, spraying warm water to clean the user up, and even playing music.

Since Japan is a densely-populated country, they don’t like to waste space. That’s why their parking lots have a smart system. They’re designed like multi-level garages.

In a hotel in Nagasaki, robots are a big part of its staff. It’s called the Henn-na which translates as “strange”. The human-like androids meet the guests, clean the rooms, carry luggage, make coffee, and even smile. However, real people work there too to recharge the robots and supervise how they perform their duties.

Sitting alone in a café and enjoying your coffee and food is common for most people around the world. But in the Land of the rising sun, you’ll get a huge plush Moomin to sit next to you in one of the cafes, so you don’t have to eat alone.

Get notifications from this blog